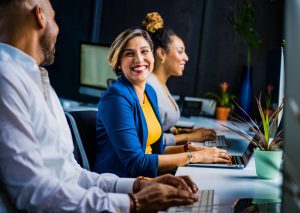 This week, using the results of a carefully tailored survey distributed around workplaces across the UK, Vitality announced Britain’s Healthiest Workplace.

The survey discusses factors such as work engagement and productivity, lifestyle, clinical and mental health as well as an in-depth assessment of leadership, culture and the health and wellbeing interventions offered by employers. The final amalgamation determines the healthiest large, medium and small workplaces in the UK across three categories.

This year’s survey concluded the following:

The purpose of Britain’s Healthiest Workplace is to analyse the link between modifiable health risks and short-term productivity, developing a common understanding of what employee health and wellbeing means, establishing a common set of standards that can be applied to all industries.

Vitality launched the award in 2013 in response to the prevalent belief that many employers in the UK failed to invest sufficiently in the health and wellbeing of their staff.

Since its inception, 510 organisations and over 181,000 employees have partaken in the study*. The first survey discovered that sick leave and working while unwell cost companies an average of 7.78% of their annual wage bill, roughly translating into a total cost of lost productivity to the UK economy of £58 billion per year*. The same survey identified that 87% of British workers had a ‘Vitality Age’ (an age based on personal health and lifestyle factors) an average of four years above their own – nearly one in seven had a Vitality Age over eight years above their age*.

2019’s results show that lost productive time has increased vastly since 2014, when employees were losing 23 days, as opposed to 38 days per employee this year*. Health-related lost productivity now costs the UK economy an estimated £91 billion, a colossal increase of 156%*. Lower income employees appear to be the most at-risk of mental health issues, with 16.4% of employees earning under £20,000 disclosing that they suffer from depression*.

The importance of monitoring and analysing the results of these surveys cannot be underestimated. Participating employers will not only attain a better understanding of the many health risks that their employees face, but also how these dangers can affect their job, overall life satisfaction, productivity and engagement. Participating companies traverse a broad spectrum of organisational sizes, sectors and regions, resulting in realistically comparable results between similar companies. Companies who participate in the study multiple times are able to note their progress over the years, taking note of suggestions for improvement which are provided by Vitality.

Our team of employee benefits experts are on hand to review existing arrangements or discuss options for well-rounded packages, ensuring a combination of benefits which truly suit companies’ respective needs and budgets. Call Anders Lewis on 0117 456 7418 or email andersl@bruneleb.co.uk.